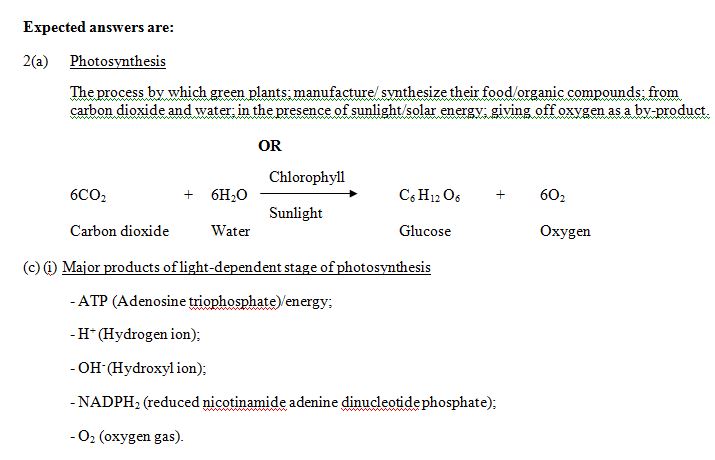 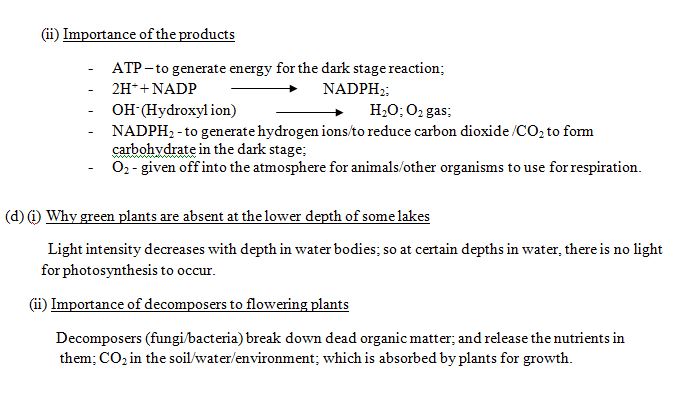 4(a) (i) Conservation
Planned/wise/judicious use/management of the earth’s natural resources; in order to ensure sustenance/availability/continuity; and preservation of the quality of the natural/original nature of the environment.
(ii) Factors responsible for decline of abundance and variety of wildlife

(b) Ways by which the Government can improve the situation

(c) (i) Eutrophication
Excessive growth of plant life/algae/algal bloom; in water courses/bodies, caused by an increase in organic nutrients and minerals; leading to the death of aquatic organisms.
(ii)  Causes of eutrophication
Overuse of fertilizers/plant nutrients which drain off into water bodies; sewage discharge; wastes from fish farming.

8 (b)     Functioning of kidney as excretory organ

Blood from the renal artery enters the bowman’s capsule; through the afferent arteriole; ultra filtration occurs in the Bowman’s capsule; high pressure in the glomerulus causes the filtration of small molecules/amino acids/ glucose/ minerals salts/ water/ urea; out of the blood plasma into the cavity of the capsule; the filtrate/glomerular filtrate passes through the nephron; where selective reabsorption of useful metabolites/glucose/amino acids take place;